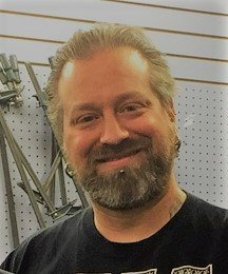 Kyle Roggendorf has spent his entire life since the age of 24 in and around music and rock bands. Both as a player and a tech Kyle has made his mark. Dedicating himself to the perfection of his craft, Kyle has worked through the years with many bands and artists. Some of which include: The Gaslight Anthem, The Bouncing Souls, Odor Sister, Hot Water Music, Dave Hause, Armored Saint, Motor Sister, Scott Ian, John Tempsta, Jewel, Seven Witches , The Bronx Casket Company, famed guitarist Jack Frost, A Pale Horse Named Death, Dave Simmons, Overkill, Bayside, Boys Set Fire and Vision. While Kyle is on the road ensuring these and other artists have the highest quality instruments, The Raritan Bay Guitar Repair STAFF holds down the fort and continues to produce the finest String Instrument & Amplifier Repair on the east coast. If Kyle was not busy enough, he also over-sees the Eastern School of Fretted Instrument Repair. Please click on our school website button to see semester dates and curriculum covered in our in-depth Repair Program. 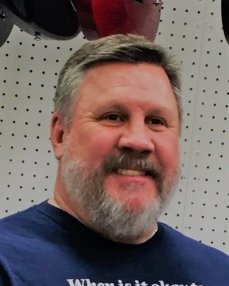 
Eric is one of our in house technicians & is the Sr. Instructor of the luthier repair school. Retiring with 23 years in the military, Eric attended the Eastern School of Fretted Instrument Repair and after many hours of instruction from CJ Civitano, Eric graduated in 2012. He interned one year with Raritan Bay Guitar before working the next 3 years with Guitar Center (Oxford Valley, PA). Eric returned to Raritan Bay Guitar Repair in 2016 & in 2017 took over the reigns of the repair school that he himself attended. Eric grew up in Louisiana where he was constantly surrounded by music. Eric has a background in guitars and trumpet. His knowledge of the instrument, attention to detail & ability to understand the customers expectations, makes the customer experience one of confidence & ease. 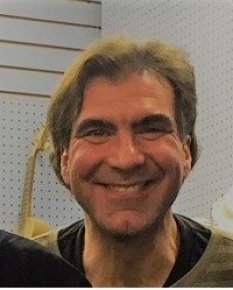 Dan Koncelik is one of our in house technicians. He graduated from the Eastern School of Fretted Instrument Repair in 2010. Immediately after graduation, Dan began his internship & quickly became full-time team member of the Raritan family. Dan specializes in ethnic & exotic instruments from about anywhere i.e. (European, Middle East, Eastern, African instruments). Dan is an excellent guitarist & percussionist. Dan brings peace to Raritan Bay Guitar Repair & we are fortunate to have Dan with us. 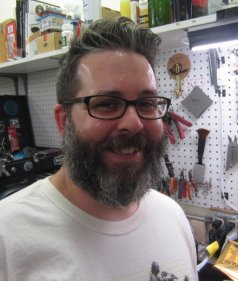 Mike McGuire is an in house technician that graduated from the Eastern School of Instrument Repair in 2013. He spent over 5 years honing his craft on his own and as the go to repair tech at Guitar Center, East Brunswick. In addition to great set up work Mike specializes in fretwork, crack and finish work, and headstock repairs. He has a great sense of pride in his work and keen attention to detail with every instrument he works on. He has 25 years of guitar playing experience and enjoys jamming on one of any number of Fender guitars and amps he calls his own. When not working on guitars you can find Mike on the golf course, enjoying the great outdoors, or rocking out to classic Green Day. 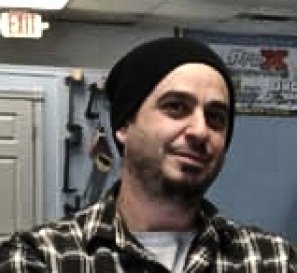 Jeff has spent his entire adult life in the pursuit of musical excellence. The owner of Canyon Music, Jeff is a Grammy nominated producer and owns his own recording studio. This is where you will find some of the top professionals in music coming to play and record. His dedication to providing the studio and production also extends to his commitment on the bench as a world class amplifier and keyboard tech. When Jeff isn't in his studio, He can be found at the Jersey Shore Guitar & Amp Repair where he works his amplifier magic. Whether its a simple service or a vintage restoration, you can always count on Jeff to get it right the first time around. 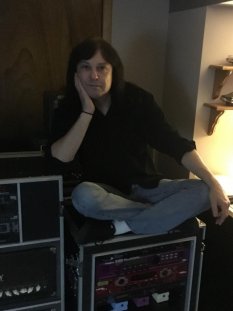 Guitar Repair Services was formed in 2014 after 40 years  of inspiration for the guitar. I couldn’t possibly begin to describe that kind of journey without first thanking my father for seeing some sort of talent in me when I was eight years old. Thanks dad R.I.P.. Beginning in the late seventies and through the eighties of some of the most unbelievable musicians of our time, my interest grew as a kid when I saw Eddie Van Halen’s first Frankenstrat. I then realized you could build your own guitars to your liking. You didn’t have to settle for run of the mill store bought guitars. After years of building my own guitars I decided to get officially schooled in fretted instrument repair. I chose The Eastern School of Fretted Instrument Repair In Freehold N.J. under the direction of Joseph Civitano and Kyle Roggendorff. Today we are together servicing Ocean county, Middlesex county, Union county , Essex county and the tri state area. Our three locations in Freehold, Toms River, and Scotch Plains New Jersey are full service facilities catering to all aspects of fretted instrument repair. My new shop recently opened in March of 2017 in the downtown area of Scotch Plains N.J. just 2 blocks from Route 22. My objective is simple. Provide quality craftsmanship, in a timely manner, with attention to each players needs. We do the repairs others won’t. Hope to see you not only as a customer but as a fellow musician.